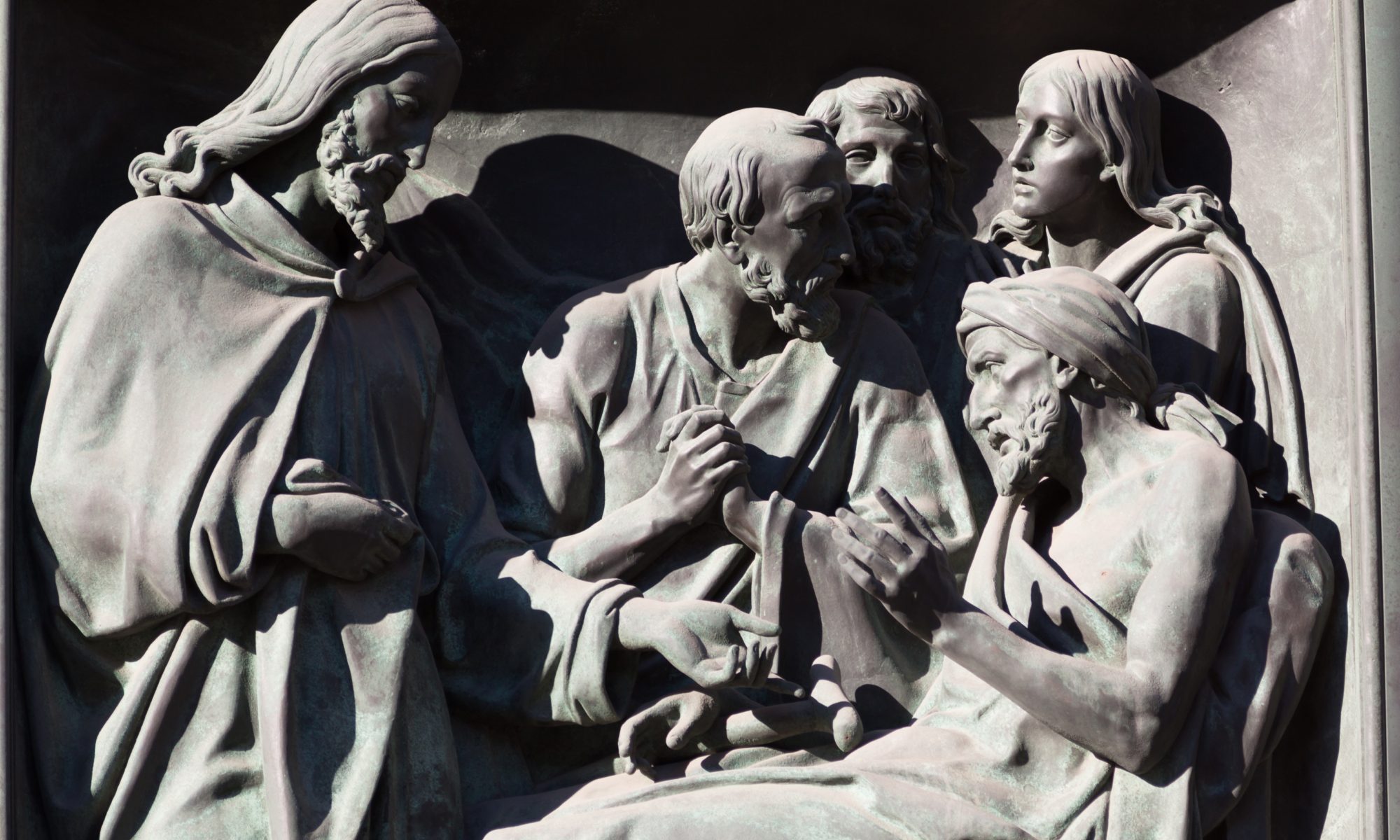 In the previous post we began our discussion of one way for Jesus to be our interpretive criterion is studying how He re-centers scripture in his teachings from our Old Testament, including studying three examples of that. We conclude that discussion by studying two more examples of how Jesus interpreted scripture.

The story of Jesus overturning the tables of the moneychangers in Mark 10:15-17 is often overshadowed by the intense physicality Jesus exhibited and the misperception that his reaction was caused by merchants defrauding people of money. But Jesus’ actions and words are a strong expression of his disdain for a holy time that had become more concerned with maximizing money and sacrifices being brought to the Temple at the cost of excluding a place for Gentiles to pray. To understand this will require some unpacking of background on the Temple and several Old Testament texts.

The incident occurred in the Temple courtyard located in Jerusalem during the Passover festival, an annual time of religious pilgrimage that brought not only diaspora Jews from around the known world but also foreigners who believed in or were drawn to the God of the Jews. As such, everyone from outside Israel needed to exchange their money for local currency in order to buy animals (e.g., doves) for sacrifice. Jesus comes into the Temple courtyard and sees it filled with all the animal merchants and moneychangers and Jewish pilgrims making use of their services. It is at this point Jesus “began to drive out those who were selling and those who were buying in the temple, and he overturned the tables of the money changers and the seats of those who sold doves; and he would not allow anyone to carry anything through the temple.” After the Temple courtyard was cleared of all such activity, Jesus explained his actions by saying, “Is it not written, ‘My house shall be called a house of prayer for all the nations’? But you have made it a den of robbers.” We might wonder why Jesus is upset with those who are providing services so the Jews can make their traditional sacrifices and prayers to God. For that we have to understand the original intent of the Temple and the courtyard in particular.

Its segregation may strike us but it was inclusive for its time. When Solomon dedicated the first Temple in the 10th century B.C.E., his prayer included that “when a foreigner, who is not of your people Israel, comes from a distant land because of your name… and prays toward this house, then hear in heaven your dwelling place, and do according to all that the foreigner calls to you, so that all the peoples of the earth may know your name” (1 Kings 8:41-43). Isaiah reinforces the purpose of the Temple as being for all people: “And the foreigners who join themselves to the Lord… these I will bring to my holy mountain, and make them joyful in my house of prayer; their burnt offerings and their sacrifices will be accepted on my altar; for my house shall be called a house of prayer for all peoples” (Isaiah 56:6-7). It is this last verse that Jesus quotes in explaining his action.

Proclaiming that the Temple had been made into “a den of robbers” is from a verse in Jeremiah that is best understood in the context of its larger passage:

Here you are, trusting in deceptive words to no avail. Will you steal, murder, commit adultery, swear falsely, make offerings to Baal, and go after other gods that you have not known, and then come and stand before me in this house, which is called by my name, and say, “We are safe!”—only to go on doing all these abominations? Has this house [Temple], which is called by my name, become a den of robbers in your sight? You know, I too am watching, says the Lord. (Jeremiah 7:3-11)

Jesus enters the Court of Gentiles and becomes upset over there being nowhere for Gentiles to pray and meditate. Jesus’ action in the temple courtyard was to cleanse it so it could return to its original intended use, “a house of prayer for all peoples.” The Jews had other Temple court areas in which they could pray and commune with God but the Temple leaders’ higher value on a right and proper sacrifice (not to mention the increased economic benefit) had caused the courtyard to be so filled with sacrifice preparation and compliance that Gentiles had no place in which they could go and pray. The “den of robbers” remark, which Jesus draws from Jeremiah, is not a charge of dishonesty against the moneychangers but a cry that activity preventing all people from praying is as abominable to God as the hidden lair where robbers plot to harm others.

The commandment from Exodus 20:8-10 is to “Remember the sabbath day, and keep it holy,” adding that on the sabbath “you shall not do any work.” The oral tradition of the Pharisees had created many rules from their interpretation of what counted as work and thus could not be done on that day. In Matthew 12:1-8, the Pharisees admonishingly question why Jesus’ disciples violate one of these sabbath law interpretations by plucking heads of grain.

The Pharisees are known for their high view and knowledge of the Jewish Scriptures but Jesus exposes their ignorance (or intentional disregard) of those scriptures as He references three scriptures back to them in a progression meant to completely nullify the Pharisees’ strict interpretation. The first two responses are introduced by “Have you not read?” Jesus points to the examples of David and his companions eating the Bread of the Presence (1 Samuel 21:6) and the temple priests weekly sabbath activity (Leviticus 24:8). Both stories include activity that violate the Pharisees’ strict interpretation of the law of the sabbath but according to the context of each in the scriptures are not seen as violations of the sabbath law.

But the “Have you not read” references are merely a set up for Jesus’ third scripture reference which begins, “But if you had known what this means.” What follows is expressed in a manner that the Pharisees did not even need to be aware of the obscure examples of David and the temple priests had they already understood (with a sense of presumption that they should have due to its importance) the timeless truth in Hosea 6:6, “For I desire steadfast love and not sacrifice, the knowledge of God rather than burnt offerings.”

In examining what to glean (and not to glean) about interpreting scripture from this story, it is interesting to note that the Pharisees’ approach in studying God’s command to “Remember the sabbath day and keep it holy” ultimately rested on asking, “What violates this command?” Jesus studies the same command and asks, “How does this command love people into God’s kingdom?” The Pharisees are guided by constraining God’s purposes and reinforce that notion with punishment. Jesus is guided by what God desires to further God’s purposes and then reinforces his view by meeting the needs (spiritual and physical) of others.